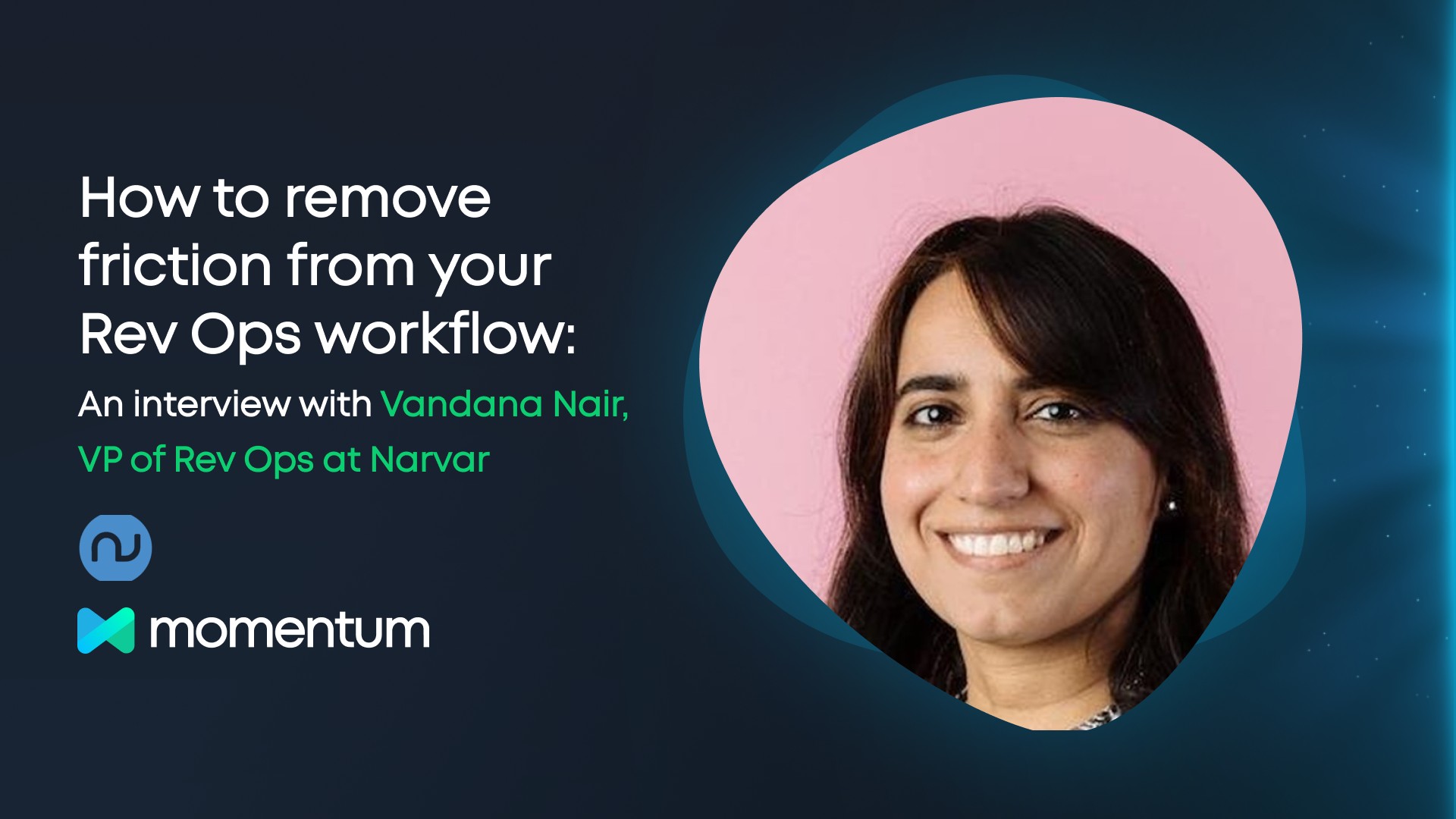 Vandana Nair’s very first job in college was as a notetaker for deaf students. It wasn’t the most glamorous job in the world, but it was her most memorable and most satisfying role to date.

It helped set the tone for what she considered helping the community - but most importantly, it contributed to her present need to remove friction from everyday processes, especially in the world of sales and Rev Ops where there is always a queue of tasks to complete.

“What I want to do is organize things in a way that takes away pain and friction. I want to make things more accessible and democratized.” - Vandana Nair

How to process and analyze data in a sales organization

Today, based in San Francisco, Vandana applies those skills in her role as VP of Rev Ops at Narvar, a post-purchase customer experience platform. Beyond handling sales planning, supporting revenue generation for the company, and - as her sales colleagues describe it - “playing God with quotas”, Vandana focuses on democratizing data collection, processing, and consumption across the organization.

Most of her team leans more towards data collection, processing, and analysis, as do most Rev Ops teams - helping Sales with quotes, building robust features into Narvar’s platform, etc. - but she continuously questions how data can be better gleaned, cleaned, and used to improve the overall platform.

“How does data actually get captured? What data can be derived out of a deal and put into the system to actually help with data consumption and analysis later?” - VN

How to set priorities in Sales Ops and Rev Ops teams

Sales Ops and Rev Ops are primarily support departments designed to remove friction within the sales process, and professionals in those fields can fall into the trap of “assumed urgency.” So Vandana does her best to remove roadblocks while setting and explaining priorities to the teams she works with.

“The kind of people that are attracted to a support organization, I find, are people that want to do and respond to things as quickly as possible. And I think that’s the trap that the team falls into - assuming that the assessment of urgency has happened on the stakeholder side.” - VN

If you’re halfway competent at your job, you’ll never lack for tasks to do - and that’s where prioritizing the big rocks in the jar, as opposed to the pebbles and sand, comes in handy. One exercise Vandana runs with her team is questioning why P0 tasks - the highest priority ones on their scale - are even designated so.

She found that assumed urgency played a role in how tasks were prioritized, and ultimately trained her team to gauge what’s truly important, match and batch related tasks, and run things in sequence - three elements of her productivity tips for sales professionals.

"Wherever there is the luxury to do so, take tasks together and understand the pattern of why things are being asked. That will allow you to come back and be like, “I’m noticing a trend here. Here’s how I think we should plan for the future.” - VN

One thing Vandana emphasizes is defining and refining the right processes to remove friction and enable salespeople to work faster. This is especially important in a deal desk role, which Vandana sees as a facilitation function designed to close deals without giving away the farm.

"If the customer is unhappy that the SLA didn’t make sense to them, that is wasted effort for many, many people. It’s the deal desks’ role to tell everybody, “Hold up, this deal is missing this, this, and this.”

That said, hiring too many people into a deal desk can lead to decreased alignment on deals, lost focus on individual growth and improvement, and a tendency to turn deal desks into transactional units that fail to fulfill their function: customizing deals to fit client needs.

When it comes to Rev Ops leadership challenges, one pain point pops up repeatedly: hiring. Selecting, placing, onboarding, training, and coaching the right people has always proved to be a bottleneck for leaders in any position, and Vandana’s role is no different.

While it’s important to hire for culture - and every company, department, and team eventually forms its own culture - it’s just as important to pace hiring as your company grows to ensure demand meets capable supply.

“I think the biggest challenge I’m facing right now at Narvar is keeping up with open roles.” - VN

When hiring for Sales Ops and Rev Ops leadership positions, Vandana looks for curiosity, a growth mindset, and empathy towards the sales process. More interestingly, she looks for someone who’s been kicked in the teeth a few times by mistakes or insufficiently thought out decisions - a necessary ingredient for someone who will be in charge of coordinating stakeholders and potentially millions of dollars in revenue.

“Somebody could be doing amazingly in everything else, but sales plans haven’t gone out in four months. That’s one thing that you have to improve - it doesn’t mean they’re a terrible RevOps leader.” - VN

For non-leadership positions, Vandana pays particular attention to curiosity around the role and its tasks - especially when candidates attempt to do discovery during an interview by asking deeper questions to understand a given scenario instead of merely throwing out the first answer that comes to mind.

“The people I have hired that have been the most successful have been the sort that immediately latch on to something, like, “Tell me more about that?” or, “What do you mean?”” - VN

On the flip side, arrogance in a candidate is an instant turn-off - especially for collaborative roles like deal desks and Sales Ops that require humility, accountability, and a willingness to learn from mistakes.

“Arrogance, lack of lessons learned, or lies are toxic for a team environment. We’re not here to be lone wolves.” - VN

What type of culture is best for a Rev Ops organization or team?

A culture of accountability, open and diverse feedback, and inclusion is best for sales teams that want to see long-term success. If Vandana was starting her career all over again, lending her support to other female colleagues and having a stronger point of view would rank high on her to-do list.

“Openness is something I really strive for in an organization. A lot of times, people are inclined to just go with what their managers say, and that kind of power is not right.” - VN

Another challenge is sensitizing sales ops professionals to the challenges their colleagues face in other roles. It’s easy to see a field sales job as more ‘glamorous’ than a desk job, but every role comes with its own set of challenges, and everybody rises to the level of challenges best suited for their skills and experience.

Empathy for other roles forms part of every sales ops professional’s personal brand, a topic Vandana is passionate about. She believes that every interaction a person has with someone else on another team influences the team brand, and that team members should remain vigilant about how their work ethic and team’s output is perceived.

“If there is going to be something that impacts a stakeholder, we must present that in a professional way that recognizes everybody’s efforts.” - VN

One more challenge for Vandana involves managing change within the go-to-market sales stack - specifically pruning it to ensure that future GTM activities are set up for success.

“When you come in and take stock of the GTM stack, you find that there’s a lot of unnecessaries. People underestimate how much change management it takes to actually fix up the GTM stack. It’s not that easy to remove things from people and ecosystems.” - VN

Rev Ops and sales trends to watch out for

Tired of entering the same info repeatedly into your CRM? Let AI handle that for you. Sales automation is a hot topic in sales and Sales Ops circles, and the time savings it brings sales teams is invaluable from a data capturing and processing perspective.

“I’ll tell salespeople, “Hi, we’re rolling out a tool - please don’t enter this information anymore because the system’s already picking it up.” And people are like, “So you’re saying I shouldn’t import my contact because it’s already going to take it from my email?”” - VN

“There have been two or three companies already that have spoken to me about how they’re looking to make the sales process simpler through Slack, helping salespeople alleviate the drudgery of having to repeat information by entering it somewhere else.” - VN

It’s easy enough to add solutions to your stack to solve pressing problems, but oftentimes faster and cheaper to simply remove friction points from your workflow.

Taking the time to assess how you generate, collect, and account for revenue can unearth previously unknown chokepoints in your enterprise sales cycle for you to remove - either with better team coaching, better product development, or better tooling.

See how Momentum helped Twingate leverage its entire team in the sales process.